Batman vs Superman: Dawn of Justice

Lets face it, everybody wanted to see this happen on the big screen: “God vs Man”, “Day vs Night”, “Black vs Blue”, Batman fighting Superman, this is the stuff that makes up fantasies of nerds and superhero fan boys. We were sure to just walk in to the theatre and get an orgasmic pleasure watching our fantasy pan out and there was just no way this movie could have fared badly. No way. But Waaait, did it?

The movie begins on a fantastic note. The slow mo, silhouetted scenes showing the all too familiar backstory of Batman was just beautifully shot. Ten more minutes into the film, you get a glimpse of how Batman fit into this universe where Man of Steel happened. Its all very good. The foundation for batman hating superman is laid perfectly in these initial stages. But then what transpires after all that is shocking. 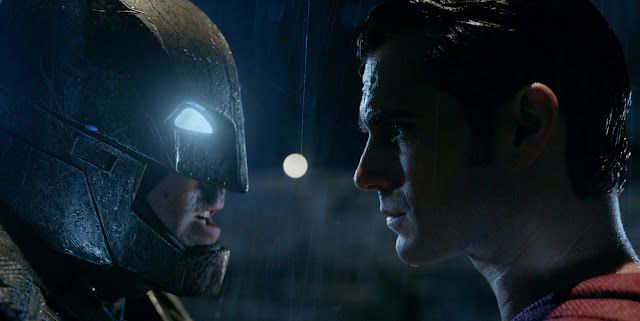 The movie refuses to take off. And we are forced through a drag. While we enjoy the dark cinematic experience that Zack Snyder usually has to offer, the darker screenplay probably blinds us from enjoying this flick. This movie takes itself way too seriously and ends up being a bore. While the action sequences in the later half kind of save this from being a disaster, it still isn’t enough.

The reason why most of us crave for this stuff is because of the larger than life characters with super powers and kick ass stories. We don’t want a story that is too “realistic”, and that is what this movie tries to do miserably. It tries to imagine the real world and consequences that would have happened after the destruction witnessed in the Man of Steel Movie. It was more political than dramatic and it kind of sucked big time. Big big time fellas.

An argument could be made that we have been too addicted to the Marvel movies with their humor and fun quotient mixed into super hero flicks but in spite of this it is just plainly clear that this movie fails to entertain us. We could, for example, take Nolan’s Batman trilogy which was serious and dark, but yet those movies stand in a league of their own. They were entertaining, gripping and fun. So the problem with this film wasn’t more of its dark tone but rather the plot and screenplay writing itself. The other disappointing aspect of this film has to be the background score. It was underwhelming to a large extent.

But coming over to the appealing elements of this film, I have to say that Ben Affleck as Batman has taken it home. He plays the troubled soul, fighting and delivering his own brand of justice to perfection. The fight between Batman and Superman was amazing and you could probably go into the theater just for those face offs. The initial stages of the film has got a different dark classy vibe to it which was pretty good, and the climax was pretty decent too. The visual effects again, coming from Zack Snyder’s school stand apart from other films, as they 300iesque in their feel.

And for someone who hasn’t read comics, I thought Jesse Eisenberg as Lex Luthor was a mixed bag. He was good at times, but felt over the top at a few places. In spite of my intial reservations, casting of Gal Gaddot as Wonder Woman seemed like a good choice too.

Though this movie tries to set up the larger DC Cinematic universe, it does so unconvincingly with a not-so-good film. On the whole I would say that Batman vs Superman was a very disappointing fare with a certain few good elements thrown in here and there. The plot and screenplay stand as culprits for this boring, non entertaining super hero film. Saying all this, I would still probably end up going to the Justice League film on the first show of the first day. May be this is a one off bad film from DC and they are going to better from the next ones.