Happy Birthday! This is as gloomy as birthday letters and wishes can ever get, but I can’t think of a better time to write and share it with you.

I have recently come across a professor who taught us about the term “male chauvinist”. And that professor after explaining the meaning of it with subtle examples, asked all the male students who thought of themselves as male chauvinists, at least to some extent, to raise their hands. Half of the class did. Half of the class didn’t. He laughed and said that those who raised the hands, are obviously, clearly, male chauvinists, while those who did not raise their hands are the same too but are yet to realize it. Everyone laughed but it did not escape us that behind that laugh were words which he meant. While he might be a tiny bit wrong about generalizing everybody, he sure has got a point.

Before you wonder where exactly I am going with this open letter to you, I want you to understand that this is a culmination of inhibitions, fears, reflections nestled deep inside of me, and I am sure of many other brothers.
The professor told that male chauvinism is not just synonymous with the antonym of feminism, but rather refers to something very simple in all our cases. If you google the word, you would find the meaning of it to be “a male who patronizes, disparages, or otherwise denigrates females in the belief that they are inferior to males and thus deserving of less than equal treatment or benefit.” In simple terms, taking for granted the role of a woman, he also said.

In the light of what has been said about by one of the accused in 2012 Delhi gang rape case in the documentary ‘India’s Daughter’, what the professor said in the class becomes that much more significant. It was the remorseless, inhuman, justified outlook the accused had on his doings that slapped me awake from the slumber I was in. It should have had the same effect on others by now. Death Penalty is not going to be enough. The male chauvinistic behavior is one that is deep rooted in our culture in varying degrees inherited from ancestors of bygone years, and aggravated by the social status of poverty today. 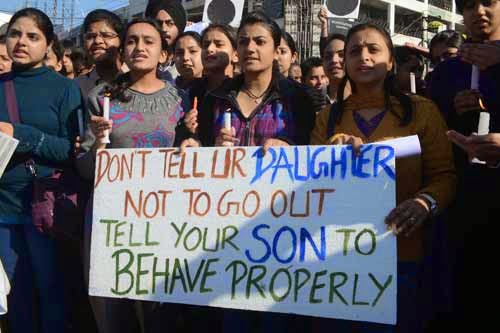 If there was one thing that every man or woman that saw him talk who finally, with a sinking feeling, realized was that, capital punishment or hanging them is not the solution for rapes nor the justice in this case. Soon after the incident, when I had read the JS Verma Committee’s suggestion against the capital punishment in rape cases, I remember tossing about the newspaper in my ignorant anger, disregarding the panel members as old fools with self centered righteousness. And two years, down the line, it took me to hear it from the accuser’s own mouth to finally comprehend the Committee’s suggestion.

In the accuser’s words “The death penalty would only make things even more dangerous for girls. Now when they rape, they won’t leave the girl, they will kill her.” And that is absolutely true, because it not only endangers the girl’s life but doesn’t even fulfill the masses wish of instilling fear among the rapists, as it is now clear that it is not lack of fear but the basic male chauvinistic attitude that is the cause

And if you haven’t watched the video yet (as it would soon be taken down by government anyway, and that is another argument altogether), this is what the accused had said,

“You cannot clap with one hand. It takes two hands to clap. A decent girl won’t roam around at 9 o clock at night. A girl is far more responsible for a rape than a boy. Boy and girl are not equal. Housework and housekeeping is for girls, not roaming in discos and bars at night, doing wrong things, wearing wrong clothes.”

“We were teaching them (Nirbhaya and his friend) a lesson” He went on to add.

And when all of this slowly sinks inside, we realize the horror that we, as a society, are today in. The problem here isn’t lack of fear. The problem here is their belief in their ideologies that justify their heinous acts. And their ideologies are only a manifestation out of their backward and poor existence. So when I look at the big picture, I realize we are only shooting arrows in the dark in the name of justice and solutions.

With my own understandings taking hold of me, I couldn’t be anything but be scared. These are self employed, ill taught, ill disguised, extreme male chauvinistic pigs brandishing their right of protection of a perceived culture for Christ sake! I am of course scared! To cure this would require a witch, magic and a wave of wand that could clear minds, or more pragmatically mass campaigns to change the principles of the certain societal structures, that could not be changed without addressing poverty alleviation and other such issues at the core. Everything is so inter-connected and messed up that the cure for this is nowhere, absolutely nowhere in sight, in the path that we, as a country, have so far taken.

Governments with their cravings for landmark law changes and populist statements that could strengthen their urban vote bank, would never be able to address this issue in its basic form. It would, to put in simple terms, require mass advertising campaigns like that against female feticide, polio eradication that our country took up an age ago through Doordarshan. But what would today’s campaign shape be? Is the issue simple enough to convey and brain wash masses through a simple enough advertisement? And what about the simultaneous poverty eradication programmes? Would everything work in tandem to ensure the safety of girl child from birth to death? It would take a leader, who is visionary in its truest sense to address this whole messed up web of sick morality.

I, as a brother, feel like it’s a game of probabilities and chances that decides the next victim. And with you working far away from where I am, makes it tougher for me each night, to know for sure that you are safely home or at least with two or three of your friends around you who are safely accompanying you. One call that goes unanswered by you at the designated time makes my heart rate silently go up. And the scarier fact is the realization that my fears would hardly have subsided had you been with me in our own city, because you would still be traveling alone more often than not, returning from work later than usual, and there is nothing much I could do to personally ensure your safety then either. There is nothing much any brother, mother or father could do to ensure your safety without compromising on your freedom.

I want you to be like any other person. I want you to be independent, which I am proud to say, you already are, do things that you want to do, and I would stand by you no matter what, talking up, reassuring mom and dad that you would be fine, everything there is fine! After all, it’s only my fears, and our parent’s fear. And we have to deal with it. All the brothers have to deal with it. All the fathers have to deal with it. But none shall ever put a bar on your freedom just because of their own fears. You deserve to fly high, fly free like everybody else, and it is upon us to ensure it. And what do we do to ensure it? Continue the belief in the goodness of humanity (without of a choice), that no matter how grim the situation looks, things would eventually take a turn for the best. At least that thought gives me, and the other brothers, the energy, the hope.

I know I don’t need to make promises to you, because you know I will always be there for you, standing guard of the every word written in the constitution of our country protecting your freedom.