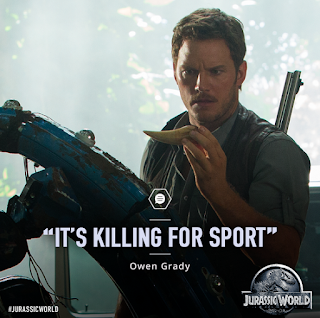 We all probably don’t remember Jurassic Park entirely, but we certainly do remember the rush of adrenaline when we first watched the film, may be? Well, at least I do. I, for one, used to imagine what it would have been like to have a functional Jurassic Park with all the attractions, had there been no slip up from John Hammond. Well yes it’s a fantasy, but it was something that I used to imagine when I was a kid!

And Bham! Jurassic world does exactly that! It shows my fantasy of how a functional Jurassic Park would look like. And it is here that I loved the movie most.

Erstwhile Jurassic Park, released in 1993, was not just a path breaking film in terms of CG and production scale, but it was the complete package of action, emotion and comedy that knocked everybody out when we first saw the film. And the latest Jurassic World had an onus of redoing those elements, and I think it is these expectations that weigh this movie down.

Don’t get me wrong, this movie is in no way a bad film. It’s a pretty good film, in terms of the action sequences, thrill factor, acting and also a bit of emotion. The biggest let down of the movie though, is simply, the most important ingredient of any film, its plot. It was way too predictive. It felt only like an extension to the trailer. While the trailer does well to prepare us to the idea of trainable raptors and the central plot line of a kick-ass hybrid dinosaur out of containment, the problem is that there isn’t anything else to the film.

Chris Pratt picks up from where he left off in Guardians of Galaxy. He was phenomenal, as usual. He kind of lifts this film with his screen presence, and the other actors did well too. As I am an Indian, I have to say that it was endearing to watch Irrfan Khan in such a big film, in a pretty significant role.

But it has to be said that the direction and camera work in this film was neat, simple, perfect. Stephen Spielberg, director of Jurassic Park, who is on board as Executive producer for this film, has picked an ideal director, Colin Trevorrow,  to helm this project who was also a fan of the original, and it showed. There were a lot of references to the iconic scenes of the original and it gave the feels whenever they were touched upon.

I felt that this movie, with its lousy script could have gone a lot worse, had it not been for Colin. He worked brilliantly around the limited script resources. This movie, definitely, is not one for the critics. It’s for us, the casual movie buffs, fans of the original, and to those who want to get entertained. This movie is not disappointing. It just pales in comparison with the original but that shouldn’t bother. Jurassic Park was a wonder! And Jurassic World is a fine film!

BottomLine: Entertaining and definitely worth a watch.

PS: There would be five grades in which I would rate movies from now. It actually stemmed from discussions with my own friends of whether a film is worth to buy a ticket for, and as we are students, we could probably use that money for better use :P