A defeat, a reaction and a champion

Indians looked like they were more bothered with International Yoga Day than anything else on the morning of 21st June, but in fact, lot of us were more anxious on how eleven of our boys would flex their muscles across on the eastern border of Bengal in the second odi. We comforted ourselves with the words “Come on! We couldn’t lose an ODI series to Bangladesh for God’s sake. Chill!” and went about our day’s activities. But 35 overs into 1st innings, all of us knew.

Most of us, after the defeat, might have played it down with “Well, we played non stop from last 16 months” or “Yeah, it’s a sport! Happens” or “yeah whatever, I am not that much into cricket now”,  but the truth was that we all switched off our TV sets, did not carry on our duty of checking out on the world by logging into facebook, and crept under our bed sheets, snuggled close to ourselves, and cried (Over exaggeration obviously).

On the face of it, a night’s sleep would have sufficed for most of us ardent fans. And it was. True Indian cricket fans are already over the defeat. Time to move on. Bangladesh bowled and batted better than us and we simply met the inevitable result of defeat. What if it was to Bangladesh? They are a side that is improving and it would do cricket a world of good if the number of good competitive teams are increasing.

But what bothered true Indian cricket fans, was the reaction of media and their deep rooted tradition of quoting without context. The headlines “Dhoni offers to quit captaincy” lay bombarded in my newsfeed and notifications in my phone. To shed some light onto the context, what Dhoni exactly said was in response to the questions of two “journalists” who questioned him if he thought he was still the right man to lead Indian cricket team, and one of them went as far as to question Dhoni if he thought himself as the reason behind the mess that Indian cricket is in (wait, first of all, what mess?), and when you take the journalists words and the following reply from Dhoni into picture, you will understand that what Dhoni said was more of a hit back at critics (as rightly headlined by espncricinfo, the only sensible media house in the country that is worth following as far as cricket goes) 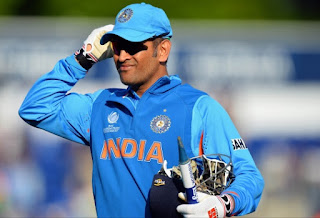 "I am really enjoying my cricket, I know this question was coming. I know the media really loves me. Yes, if it is a justifiable thing that if you remove me and the Indian cricket will start doing really well, and if I am the reason for all the bad that is happening to Indian cricket, definitely I would love to step away and play as a player. Ultimately you want India to win. It doesn't matter who is the captain”
"I was never really in line to become a captain. It was a job or responsibility for me. I have taken that responsibility. If they want to take it away, I am happy to give it away”

Now for a second, think about the stupidity behind the scribes question and how Dhoni replied, and also about how foolishly Indian media quoted it out of context. #JustThingsIndianMediaDoes should be a trend every time they pull up such stuff, so that we as people could alienate our identity from theirs so that we Indian people itself are not scathingly looked at as immature as our media. Indian cricket fans are mature and composed enough to handle defeat to a former “minnow”, but certainly that’s not the picture that is being painted to the world.

Dhoni was never as classy as a Dravid, as elegant and wristy as a Laxman, as talented as a Rohit, and as compact as a Sachin, but he has made it thus far with his awkward, unorthodox batting techniques. His value lies not just in the runs he contributed but the way he ran things in Indian cricket for the last 7 years without any scandalous episodes and controversies that were a routine to break out in the previous eras of captains. Being the captain of Indian cricket team is not just about the decisions taken on field but also about everything else outside, and Dhoni was a master at it. He cut down potential controversial questions with sarcastic comments filled with humor, gave lesser opportunities to be misquoted and defended and backed his players in front of press. The true value of Dhoni’s presence would be realized only when the sun would have set on his career.

I believe Dhoni’s skill set would someday be recognized as a case study to understand emotional intelligence with regard to leading a team, any team. When you see Dhoni leading a fielding side at a crunch situation with the batting team, say, require 20 runs in 18 balls on a flat wicket, it is not that he is not tensed, it is just that he has the immense EI ability to mask it, separate the emotions from his thinking capacities and then take decisions.

And the pinnacle of the achievement of his emotional intelligence skills can be traced to the recent success of Dhawan in the world cup. He backs and backs a player, drops them, gives them time and then picks them up, believes in them and they deliver. And this is possible only when a captain is able to understand his team emotionally, individually and work on it accordingly. It is no fluke that we have had tremendous success in ICC tournaments in the last few years because it was his ability to handle immensely talented players and make them perform at the highest level.

I may sound like a die hard MSD fan, but the truth is that, I absolutely am not. I am an admirer of Dhoni for his certain skill sets. I have been a neutral observer of Dhoni. My neutrality is true to the day and it was never affected by developments such as dropping of some of my favourite senior players like Yuvi, Sehwag or Zaheer, nor has it swung to the positive side with those big sixes that he hits.

There are allegations against him off the field. They might be true. They might not. I will never take controversial things on their face value as reported in media. Even if they are true, I will remember Dhoni for the man he was in front of the camera, on the field and off it, and in his own way he was the classiest, most compact and elegant player of them all.

PS: I am just sometimes sad that fewer people recognize him and give due credit for what he is, because I fear we are slipping into  a world of cynicism. If we look at things as simple as cricket that ought to be enjoyed, in such a pessimistic way, then well, Sachin save us :P

Email ThisBlogThis!Share to TwitterShare to FacebookShare to Pinterest
Labels: Cricket