My first theatre experience: Between the lines

And I fell in love with theatre. Truly!

I have, for a very long time, wanted to go to a play but thanks to my procrastination I never actually did. Until of course this unsuspecting lovely Friday evening of August that I drove through the haze of polluted chemicals, beating my long time friend, procrastination, to go to a play, partly because I wanted to try something new and partly because I was bored of movies and partly because of the artistic brand associated with the name ‘Nandita Das’, the director and actress of the play ‘Between the lines’. 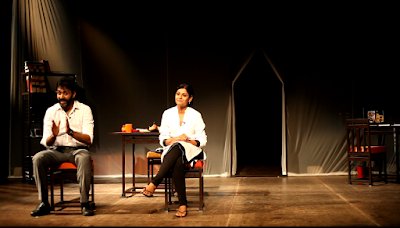 And as much as I hate living in cities for the pollution, I love everything else that they have got to offer, especially the many art forms that converge here that one could indulge, explore and get lost in. And this visit to a theatre to witness a play for the very first was a very conscious effort on my part to explore in that regard. I walked in to Ravindra Bharati with my friends with very high expectations of something that has always been told very highly of. A play. As I took my seat and looked down onto the stage from the gallery, everything felt perfect: The lighting, the set, the stage and the buzz of a capacity audience. I knew it was going to be something special.

It’s a shame that it took me 20 years of my human existence to witness an art that existed through the ages, far older than what our history could take us back into. And to make up for the delay, I now realize I am going to watch many more of these, because this was an experience that will be cherished by me. I write about movies, I review them, because the stories told are more than stories. They are an expression of a being told through the eyes of an actor, the string of a musician, the vision of a director and the passion of the crew. And the play that I watched today was an embodiment of all that, but it felt much better than watching a movie because I got to witness live acting of absolute class.

The play wasn’t just about the ambiance inside or my juvenile excitement of it but it was rather the plot itself that was engaging. The play was about a husband and wife, Maya (played by Nandita Das) and Shekar (played by Subodh Maskara), who are lawyers who accidentally take a case which pitches them against each other. Shekar, a reputed criminal prosecutor who doesn’t lose cases usually, is up against his wife, Maya, who takes up her first ever criminal case, as a defense lawyer, after a long gap, which eventually blurs the line between their professional and personal lives. The play reflects upon finer intricacies of the feminine struggle that is existent even in a modern day couple. The little things, the little actions that cannot hide the male chauvinism is up on the fore and the dialogues aren’t written in a way that is a propaganda for feminism but they were rather a repartee that was witty. Frankly, there wasn’t a dull moment for me.

The ingenious single set which was convincing for the two locations of the play, the simple yet perfect props that served for both home and court acts, the great cast that comprised of only two but who played four characters, the endearing background score, the phenomenal acting, the realistic nature of conversations, the deep thought provoking plot that makes you want to read between the lines, together makes up one enjoyable 80 minute ride. Frankly I wished I could watch this play immediately again. I enjoyed it so much. And I want to watch many more of such plays. Hopefully they come along.

As I have not seen any other play, I do not have a comparative scale as such to know for sure if it was in fact a gem of an act. But the fact remains that for me it simply was. And if this play is the pinnacle of plays, I would want to watch plays, and if this play isn’t the pinnacle and there are better ones around, then I would obviously want to watch them even more. Anyway I have found a new love in theater art. For now, that would do. Better late than never.