The point of contention: Number 3

Miracles do happen in cricket. But as fans it is so tough to be on the right side of a miracle. Sadly, Indian cricket fans have found themselves on the other side time and again in the last one year- once in South Africa, once in New Zealand and once in Australia, and now in Sri Lanka where the match had slipped right from the hands of Indian team. Bad luck boys. Bad luck

Forget the results, while they do matter, they are not everything, because in the last one year, Indian team has played some really good cricket with some great batting displays and bowling spells by GenX. We just lacked the killer punch more often than not but it is not something to worry about just yet. It will develop. Give the same bunch of players some time and it will.

But quietly, unnoticed by many, there is something else that is slipping away from Indian cricket fans. It is Pujara of course. Life doesn’t give you two Rahul Dravids in succession, but when it does, just don’t do what Indian cricket team management is doing right now. Pujara is The Wall of a new era. Be it the temperament, the solid technique or the saint-like calmness itself, he is what every Indian could only have ever dreamed of after Rahul Dravid announced his retirement.

Before the start of Sri Lanka tour, Virat Kholi justified his preference of Rohit Sharma over Pujara by stating that he needs someone who would counter attack and score freely at the top (as if we did not have Dhawan or Kholi himself for that matter and also as if every great test team had a counter attacking number 3 batsmen. Funny) and also that Rohit deserves a chance at number 3. Sure, we backed Dhoni for his choices, preference for his players, but Dhoni always came up with rationale reasoning over his decisions. Kholi’s argument though has no buyers. 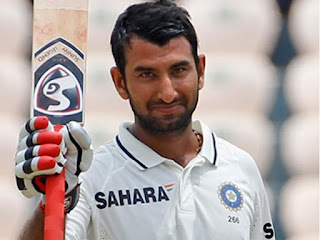 While Kholi can back his instincts and give chances to players but the larger question remains is at what cost? Pujara for that matter did not perform so poorly that it would have warranted that he be dropped from the team. In the three test series against SA, Eng and Aus, Pujara averaged 70, 22 and 33.33 respectively, stacking up numbers that weren’t too bad. And in the same period Rohit has 11.25, 17.00 and 28.33 against SA, Eng and Aus. And while Pujara had 1 test hundred and 3 fifties, Rohit has 1 fifty in that period.

Number 3 position is about more than just scoring big hundreds here and there, it is about seeing off fiery spells from Steyn, swinging bullets from Starc or table top turners of a day 5 pitch. But if the number 3 fails in that phase, it exposes off the middle order a bit too soon to the wrath of oncoming fire from bowlers who are on top spells.

Rohit Sharma, the eternal talented star of Indian cricket, has some scintillating ODI knocks but he never displayed the solid technique that would have instilled a belief in the fans that he could see through spells from Steyn or Starc on tough days. On the other hand, Pujara had already proven himself in series against SA and also in Australia briefly where even though he didn’t score heavily he did all the hard work and saw off the tough opening phases but unfortunately got out to soft dismissals. There was no way he could have been dropped after a not-so-bad first three tests against Australia. But dropped he was on the first day Kholi took up full time captaincy.

It is still very early into Kholi’s Test captaincy era, but we are already getting what the looks have promised: Arrogance and brashness. It is one thing to be aggressive but it is something else to expect every batsman of the team to be a replica of the captain, the aggression. What if Pujara isn’t aggressive? Does he have to be? To play in the Indian team? Was Dravid aggressive? Did Sourav Ganguly drop Rahul Dravid for a Yuvraj Singh? Nope. It’s still early to comment, but these are disturbing signs as far as captaincy is concerned.

It’s good that we lost the first test in such a shocking turnaround. It gave me the opportunity to pout and cry about Pujara, because if we had won, Kholi would probably have been right and me and legions of other cricket enthusiasts wrong if we brought up the Pujara topic. Kholi had already said that he would give an extended run to Rohit Sharma to prove himself at number 3, because he believes if Rohit gets going there is hardly anything that could stop him. But test cricket isn’t about that one knock on a flat track, it is about much more.

Forget Rohit, it is not about Rohit. It is about Pujara. Does he deserve to sit out on the bench match after match? Was he that bad before he got dropped?
Look up the stats: He was not.