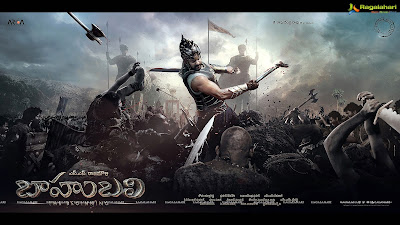 Bahubali: The Beginning is like a wave that does not rise high enough in its course but hits the shore with a powerful might, calling curtains on its short lived life with that deafening splash. The first half of Bahubali Part 1 is like that, it does not rise, forget curling and rising up, but yet in the second half strikes us with a force that makes us take notice of a path breaking Indian film from one of the modern masters of Indian film Industry, Mr. Rajamoulli. The movie, not only has some of the best ever CGI shots of an Indian film but also narrates a tale that is worth escaping into. Bahubali takes us quite convincingly into the world of kings, queens, ministers and traitors, and of course wars.

The two biggest surprises to me from the movie were MM Keeravani’s back ground score and Ramya Krishna’s screen presence. While MM keeravani’s score packed a punch and gave depth to most of the scenes in the movie, Ramya Krishna’s commanding role was gripping. Prabhas and Rana Daggubati have both done quite well, and in fact the acting in the film was top notch from all quarters, except of course from Tamannah who has established herself as someone who just cannot act. Period.

The sheer imagination and magnitude of Rajamoulli’s brilliance is at the fore by the end of this film. Notice the use of my words “by the end of this film”, because that is where the problem lies with this film because though it is a path breaking film, it misses meeting its true potential of being one of the finest ever Indian movies. And this primarily is because it suffers heavily from the over ambition of Rajamoulli. There is a fine line between ambition and over ambition that is drawn by pragmatism, and the director caught up in a world of his own creation is guilty of breaching that line.

The movie’s first half wasn’t that great and I am infuriated because had it not been for these three simple, totally avoidable “mistakes” in the first half, we could have had a near flawless masterpiece: Terrible CGI, weak screenplay, and unconvincing sequences.

1.       The unconvincing sequences: One of the foolish arguments that you hear here down south is that “if one can accept some Hollywood star hitting the crap out of 20 bad assess at once, why can’t one accept our heroes doing the same? If one can accept cars flying in all directions in fast and furious, then why can’t we accept our Sumos flying up in the air too?” And the answer is in the word “believable”. As an audience, we like watching unrealistic stuff (Like cars flying off and heroes kicking the hell out of others or even magic), and we like watching unrealistic stuff which are perceived, executed, shot and presented in the most believable of ways. And Bahubali part 1 in its first half doesn’t do that, the sequences stretch from being hilarious to outrageous because it was just not believably shot. For example, if you want a guy to jump from one hill to the another, why to make him look like he is just popping up like superman, instead of showing that guy approaching that jump at least with a run? Just one example to elaborate on my point. There were other sequences like that.

2.       Terrible CGI of first half: The limited resources who could handle CGI: In most of the Hollywood films, there are hundreds and hundreds of CGI artists who work on the innumerable scenes of a single film, who because of their strength of work force manage to maintain quality for every single scene. And an Indian film doesn’t have that strength. And when Rajamoulli showed some of the CGI of the movie in trailers, we were overwhelmed, but the truth is that those brilliant CGI were far and few and were sandwiched between the usual underwhelming Indian graphics. When I first watched Eega, I immediately became a huge fan of Rajamoulli, because in Eega, Rajamoulli was aware of his resources at hand and worked brilliantly to set frames of most scenes in such a way as to minimize the use of CGI, resulting in lesser work to do in terms of generating computer graphics which resulted in quality graphics. Compare that to Bahubali and you would be shocked to see that the same guy had a brain freeze here. For example, there was a shot in which a lady was speaking at the foothill of a waterfall and frame was set from way beneath her so as to show her and also the entire waterfalls behind her when she was delivering a dialogue. I mean why? Just why? That CGI behind her was terrible. Couldn’t the frame have been set higher and minimized the appearance of waterfall to just water cascading behind her? That would not have required any CG? So, basically there were a lot of scenes as such, which looked like they unnecessarily had to go through a very busy computer graphics department, with the end output being compromised CG quality, except for a few scenes of course (On an average it felt like there were 6 terrible CGI scenes out of every 10-with the other 4 being phenomenal).

3.       Clearly, the decision to make this into a two part film was taken citing financial reasons and it wasn’t in Rajamoulli’s initial plans, and one could forgive the loose screenplay as such, but it is no excuse to stretch a film for 160 minutes when it could well have been cut down to anything less than 130 minutes. Those 30 minutes, is the reason why it is generating the negative flak among the masses, because the first half almost felt “tiring” to watch after a certain point. The movie simply was not flowing there. 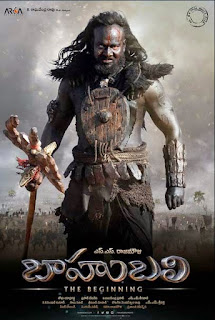 Saying all this, the movie moved onto a second half which was unlike anything I have ever seen in an Indian film before. The CGI in the second half was near perfect. The entire war sequence was of the highest standards. The story moved at a brisk pace, with some great acting, good background score and some breathtaking moments. And a special mention to art direction team which has imagined and executed the Mahishmati Kingdom aplomb. From the costumes to the sets to the CGI buildings of the empire, kudos!

In the end, it looked like there were a lot of people who gave some of their best work into this film and credit must be given to the director for bringing them together and getting the best out of his team, but sadly, I couldn’t help but wonder if Rajamoulli was both the Hero and Villain of Bahubali: The Beginning, who has both unnecessarily flawed it with over ambition and resurrected it with his natural brilliance. The movie, on the whole though, was pretty good. It was flawed but it was not bad on any scale. It was better than most Tollywood and Bollywood films, but it was only that we, as fans, expected so much of Rajamoulli.

Not to be cruel, in parts, Rajamoulli did deliver what he promised: An Epic.