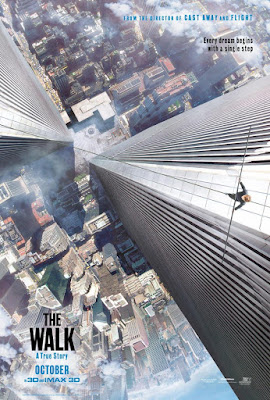 The last time I came out of a theatre and said, “Wow, the 3-D for that film was something!” was probably after I had watched Avatar on the world’s biggest screen (Prasads IMAX) in IMAX 3D in 2009. And now after watching The Walk, I revisit the good olden days where 3-D films were exciting and rare! (And mind you, I loved the 3-D experience in spite of it not being an IMAX experience, as we Hyderabadis do not have an IMAX theater anymore)

The Walk comes out as a film that you would least expect to score highly in 3-D experience category, as it is not basically an action or adventure or a fantasy film but rather a simple true story of an incredible man’s unbelievable act of walking on a high wire between the World Trade Centers back in 1974.

The director, Robert Zemeckis, who directed some of my all time favorites like Back to the Future Trilogy, Polar Express, Forrest Gump and Cast Away, brings not only this act to the big screen in the most glorious way but also the heist like planning that went behind in pulling off this stunt back in the 70s in New York. The movie adopts a different narrative style where Philippe Petit (played by Joseph Gordon Levitt) addresses the audience directly here and there. That might not be something that everybody would enjoy but I most certainly did. In fact whenever the narrative was on, I felt that the movie almost had a poetic aura to it.

The movie beautifully transcends from the ‘poetic phase’ to the old fashioned heist phase of a movie and then again back to the poetic phase of the final act. The movie had layers to it in terms of story telling and the movie portrayed the layers of emotions running high behind the man, Philippe, brilliantly.

Don’t expect a fast paced, out and out entertainer, as the first half takes it time to establish the character. But the build-up, the back story, the simple but witty dialogues, the cinematography that captures 70s of Paris and New York, everything, carries the feel good factor throughout the film and culminates in an epic thirty minute final act that was visually breathtaking. Trust me when I say this, that entire sequence on the high wire couldn’t have been any better. It is immersive cinematic experience at its best with direction, acting, visual effects, and editing peaking in tandem.

Joseph Gordon Levitt as the French guy trying to bend into a New Yorker with an American accent is convincing and that is also a source of intentional comedy. Ben Kingsley in his small but prominent role is a delight to watch as usual. And all the actors chipped in with pretty decent performances themselves.

In short, the movie might be on the slower side in the first half (even though I didn’t feel so) but the last thirty minutes of the movie more than makes up for it as it is truly stunning and the entire film carries the feel good factor. It is inspiring and it most certainly needs to be experienced in 3-D.