With a combination that boasts of AR rahman, Imtiaz Ali, Deepika Padukone and Ranbir Kapoor, four of my most favourite artists in Bollywood from music, direction and acting respectively, I was expecting to get blown away. But well, not so much. 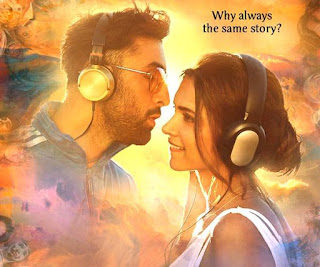 The warning signs were there. The trailers and promo were mediocre, which promised a been-there-seen-that story line and in fact they were even guilty of revealing too much.

There are two surprising things about this film, one is that Imtiaz chooses to reveal his entire story line of the film in the trailer and second, the entire story is done, chewed up, by the interval scene.

As I came out of the theater at the intermission, I was wondering. So if that was basically the entire trailer, a.k.a the entire story, that panned out in an hour and 15 minutes then what was left? Other than the very obvious ending?

Well, Imtiaz must have wondered so too. Because, it’s ridiculous! This movie has a climax that stretches the entire second half. Even if this was a very melodramatic Hollywood, it would have hardly survived for another 20 minutes. But no, Imtiaz drags it for 75 minutes! 75! Are you kidding me, Imtiaz? Gosh! An entire Sherlock episode is done in that time!

The drag coefficient of this movie was so high that the thrust provided by Ranbir, Deepika, AR Rahman is rendered irrelevant as the movie nose dives into the ground after the intermission.

The film is about a regular guy, an average bloke finding true love, finding himself, finding his calling. It’s a simple enough concept. Except that Imtiaz digs so much into the past of his protagonist that he shades his darkest character yet, beating his own lead character from Rockstar. In fact, if you thought Ranbir screamed a lot in Rockstar, then fasten your seat belts for more of it.

The character of Ved (Ranbir) almost turns sadistic and sociopathic at few moments in the film and in spite of the director’s best efforts to justify through the flashbacks, I just could not buy it. I believe the movie, without Ved going bat-crap-crazy, would still have panned out exactly the same way as it does (and even better perhaps with the shorter run time). Sometimes, there is a concept, there is a story attached to it. Yes we get it. But the execution of which might be very difficult and this here was such a concept. Sure, we understand, the reason for Ved acting the way he does, but do we buy it on screen on reel time? Nope. This is the lowest point in the film for me. There might be film fanatics elsewhere who might like this movie for these moments, but it just wasn’t my cup of tea.

The first half of the movie though is an altogether different story. It has some good music, great direction and acting that will keep you smiling and enjoying. It has all the Imtiaz Ali flavor that is synonymous with movie-goers. It keeps fans of his, like myself, content. The dialogues were witty and chemistry between the lead couple is electric.

And Ravi Varman (cinematographer of Barfi) weaves his magic throughout the film. The cinematography is top notch. Corsica is captured beautifully and so are the nights of Delhi. It’s just art and I couldn’t help but appreciate it every frame. He has seriously got to be one of the best doing the rounds in India.

AR Rahman does what he always does. There might be folks complaining, ‘this music doesn’t feel like ARR’ but once one watches it in the theater, one would get that ARR scores for the film, the plot. The kind of music that eases itself into the written screenplay giving a particular scene that much more of an impact. Simply put, its music made for the film. Perfect.

Now speaking about my favorite aspect of the film, the acting! Wow! Deepika and Ranbir rock it all the way. Ranbir especially shows us why he is arguably the best in Bollywood right now. And Deepika, my love :p what can I say about her? She is absolutely stunning! Breath Taking! My god! (Wait, I am a huge Deepika Padukone fan, so I wouldn’t even understand even if she performed otherwise, so your call, here) She would rivet anyone’s eyes while she’s on screen. There is no way I was going to watch this film again, but just for Deepika, I might watch it on Blu-Ray sometime later.

Coming to the direction, well, I have to concede I was expecting a bit more from Imtiaz. Sure where do you go with such a concept? About finding oneself? But Imtiaz over does a lot of elements- the melodrama, the dwelling on the past, the obsession on the idea that all the stories are the same, the poetic analogies within the film, the dark side of Ved, the obsession of Tara (Deepika) on Ved- to name a few.

So I would not suggest you to skip this film as there is Deepika in it, but sure, watch it if you must!