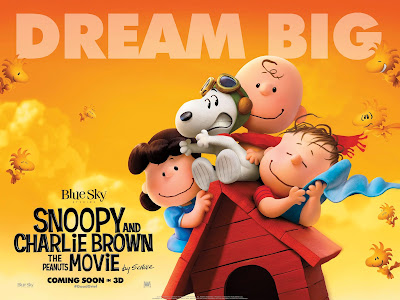 The peanuts is my second most favorite comic strip that I check out in the newspaper every day (Obviously, Calvin and Hobbes is my most favourite. Btw! Hey! Hollywood, when will we get to see a movie on Calvin and his pet tiger?) Charlie Brown is one of those characters that you would instantly love. That loves comes from the depths of the pity you feel for the poor guy. It’s the kind of love that we have for Tom. We really feel sorry for him because Jerry sometimes gives him such a hard time. Poor Souls.

And The Peanuts comic strip is about more than Charlie Brown anyway. There’s his dog, snoopy, his sister, Lucy, and his little gang of friends Schroeder, Peppermint Patty, “pig-pen”, Linus and of course the evil Lucy.

So does the movie do justice to all these characters? Does it have the core essence of the comic strip? Yes and yes.

The movie felt just like an extension of the comic strip. It had all the things that you love the most from Peanuts. It had Snoopy’s big dreams- the World War fighter! Fighting his arch nemesis The Big Red Baron who abduct’s Snoopy’s love- and it also delightfully showed everyday struggles of Charlie Brown. He leads a life against such odds! Damn!

The movie also had the arrogant Lucy making life tougher for Charlie. And yes The Little Red Haired girl too- The female lead of the film! The only thing that I missed was some scene with Linus’s blanket. I just love whenever Linus and his blanket show up in the strip. But yes, all of it can’t be there in the movie.

The animation of this movie is a bit different than the conventional animation (I have got to read more about why and how they do it) and it was very good. It fit into the narrative. Once again, my complaint is on the 3D. I did not see why this movie had to be in 3D. A non-3D version would have been equally good. I just don’t understand why Hollywood does this.

The movie was very simple, cute and absolutely fun. It has what is expected of it.  Me and my friend, both of us being Peanuts fans, enjoyed the film. We were laughing out loud at many moments because it was just so relatable. The movie just has those brilliant feel good moments. I go to movies for those moments. These movies capture that "feeling" so well. There are lessons to be learnt for not just kids but for us too. Somehow, movies always inspired me. And even movies as simple as these too work their magic. The underlying current of not giving up, to fight it out, to go that extra mile for something that you want, these are gold!

But at the same time this movie does not have a great story that will pull audience who aren’t familiar with the comic strip. The screenplay could have been tighter, but given the story line that they chose to go ahead with, I thought it was decent enough though. If there was more of an “adventure” kind of story line I guess this movie could and would do much better with other audiences too enjoying it. But surely, the ones who made the film must have had their reasons.

So, can the movie have the ability to create a new fan base? Probably not, but it does strengthen the stranglehold over its comic strip fans. I think the makers were trying to be as true to the original and they made a commendable film for their fan base.

So, if you are familiar with Peanuts and like it, you would most certainly enjoy this. But if you aren’t, pass this one.