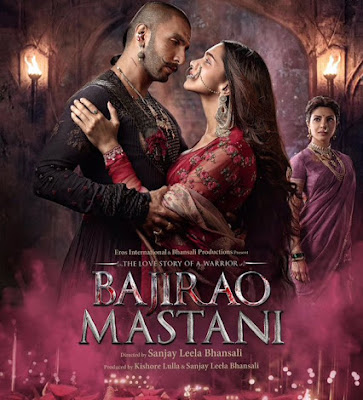 I always had tremendous respect towards Sanjay Leela Bhansali as a film maker since Black and Guzaarish. Guzaarish for me remains a beautiful film which I believe is a highly under-rated film in Bollywood. Anyway in Bajirao Mastani, Sanjay Leela Bhansali sets out to tell the love tale of Bajirao and Mastani, with pomp and splendor attached to film-making of yesteryears where huge sets and impressive costumes were norms of the day.

The film’s cinematography has that amazing dark-golden texture that glitters many frames. The lighting and the minimalistic use of CGI by setting up smart camera angles is so brilliant that the movie is simply a visual treat all through. There were many sequences which caught my attention for the way they were shot but the one that impressed me the most was the song “Deewani Mastani”. This was amazing! The set, the costume of Mastani and the grace with which Deepika sways to the tune! She took my breath away for a second there, again (Deepika <3 )

Sanjay Leela Bhansali does a tremendous job bringing the historical characters back to life through Ranveer Singh, Priyanka Chopra and Deepika Padukone, all of whom own their respective roles. If Ranveer Singh had the body language of a rising powerful Peshwa in the beginning, he was equally good to transform into the troubled soul waging a losing emotional war against his own kin.

Priyanka Chopra excels in her portrayal of the role of Kashibai. But Deepika Padukone steals the show anyway. She was stunning in her costumes and I believe Sanjay Leela Bhansali might have showed Deepika in her most charming way. His use of Slow Motion here and there added the edge to the story telling process. He composes the music himself for this film and he does a fairly decent job. Three of the songs are very good and the background score of the film was pretty pumping too, especially for the small battle scenes. 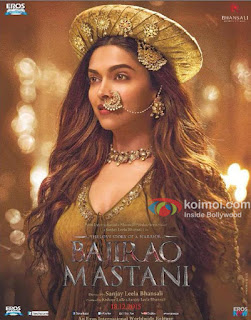 But for me, the most surprising aspect of the film has been the dialogues of this film. They are the kind of dialogues that would make you whistle in an auditorium but with a certain kind of class attached to that whistle. Well, how can whistles and class go together? Well, it’s those kind of dialogues, trust me! There are punch dialogues, cheesy romantic ones, and solitary mass appeal ones here and there! To give an example, lines like these:

The point is that movies can usually be classified into three tiers of commercial, artistic, and artistic-mainstream cinema. These categories can more or less be drawn by the audience based on their entertainment value or artistic value. Very few films have managed to fall right in between commercial and artistic films, making them both a critical and box-office success. Do not get this wrong, this movie is not a war-film. It's a film on love. And it takes time to build itself. It is more like a drama and hence I don’t see this movie catering to most types of audience. This movie at most would be liked by those who are into watching films that are bigger than mere entertainment for 2 and half hours. It for those who seek a lasting impression from a film and I think Bajirao Mastani does leave a lasting impression. It is just a beautiful film.

And it is tough to see this film garnering commercial success through its entertainment value. This movie is more ‘pure’. It is honest, simple and classy. The movie does not have fast paced writing. The screenplay is kept true to the tale that was promised: “Baajirao Ne Mastani Se Mohabbat Ki Hai Aiyashi Nahi”.

I thoroughly liked this film. Bajirao Mastani has magnificent sets, powerful dialogues, splendid costumes and stellar performances. For a period drama on love, this film is artistic film-making at its best. But can this be everyone’s cup of tea? Probably not.