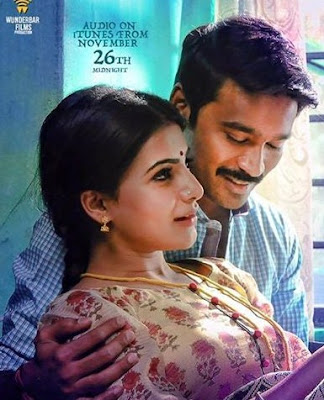 I have started following Dhanush’s work ever since Ranjhanaa and I pretty much look forward to watching his impressive performances in film after film. So, Nava Manmadhudu (Thanga Magan in Tamil), unofficially dubbed as ‘VIP 2’, starring Dhanush,  Samantha and Amy Jackson is directed by Velraj with music from Anirudh Ravichander, basically the same team that brought the cult hit Raghuvaran Btech (VIP).

Nava Manmadhudu follows a predictable pattern, similar to that of Raghuvaran with the shorter runtime of about two hours being split equally between comedy, romance, verbal face-offs and couple of fights. It makes for a very entertaining first half with clean, refreshing comedy here and there, while the second half makes for a decent engaging watch.

This movie has a simple storyline backed with very strong performances from Dhanush, Samantha and the support cast. And let’s just say Amy Jackson has a very beautiful smile and she is improving with her acting.

For me, the most endearing parts of the film have been the sequences where Dhanush and Samantha were together on the frame. They had remarkable chemistry going for them. Samantha did extremely well in a role that we haven’t seen her before and she carried away the part of a quintessential new bride of a middle class family with ease. She looked elegant in her sarees and put on display new dimensions in her acting that she would seldom have been able to with Tollywood industry.

The USP of this film though, other than Dhanush, has been its music. I have been hooked onto two songs of this film with them being played out in a repeat mode on my playlist. Expectedly I have been listening only to the Tamil versions of these songs, Enna Solla (Emannavo in Telugu) and Oh Oh (Manasa Manasain Telugu) even though I don’t understand the language because somehow I feel the dub songs are never the same. (Link to the Enna Solla Song- https://www.youtube.com/watch?v=5iR5V9sHEtQ) The background score of Anirudh is pretty kick-ass too whenever the scene demands for it and I have to say that he is impressing me more and more as a complete film composer with each outing.

But the point where I felt the film falter was that while the second half is engaging enough, it just lacks the strength in its central plot that we expect it to have. Most of it just feels a bit too routine and the ending too is felt a bit abrupt. It lacked certain x-factor, like a single strong antagonist. But all of it can be over looked and on the whole the movie makes up to be a good enough time pass flick.