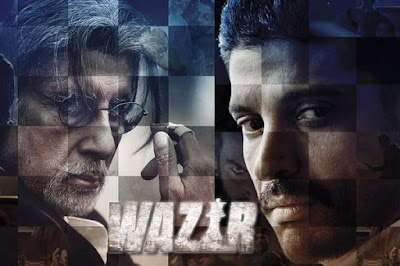 From the trailers it is clear that Wazir is a content drive film written by Vindhu Vinodh Chopra and Abhijat Joshi. The latter had written screenplay and story for films like PK, 3 Idiots, Lage Raho Munnabhai which won the hearts of both critics and audience alike, and it wouldn’t have been wrong to place high expectations on this film, especially given the star cast and the tone of the trailer.

When the trailer was out, it impressed everybody and it looked like we were in for a proper thriller treat from Bollywood. But after watching the film, even though I liked the film, I have to concede that it doesn’t exactly make up to be an engaging thriller of a film but rather walks off being a decent revenge drama. The reason for which could be that the movie is laced up with too many threads and themes, and is itself confused of its core theme.

The movie starts off brightly and seems promising too with its Talaashisque tone. But the way the movie unwraps in the latter half isn’t as compelling as it could have been. It jumps from one thread or theme to another quite noticeably. It was almost like taking sharp turns at high speed, and you notice the lack of subtle transition that we are synonyms with Hollywood thrillers.

The movie goes along at a brisk pace and the first half is pitched perfectly but it is the second half that seems hurried. Things almost seem forced and one can’t help but wonder if the movie could have fared much better had there been a plainer, simpler screenplay with a lengthier run time which would have given time for that transition.

But saying that, the last 5 minutes of the movie might drown the entire feel of this movie for the audience. The spoon feeding that ensures at the end was totally unnecessary, and makes the audience feel dumb. I think these are little touches that make all the difference. End the film where you got to end it! I think those 5 minutes could be a very costly mistake for the movie as the audience who are waiting to leave the theater are forced to sit through and be explained of what they already knew. It changes the perception of the film.

But other than this, there are a lot of good elements in the film. The Farhan-Aditi thread is such an element which was very good. They, Amitabh and the rest of the case chip in with fine performances.

The movie was emotional, well directed and entertaining enough. It has enough content to play with our heart strings. The characters are well established and you feel, root for them and that's a sure shot sign of a good film.

I love any film with good cinematography and this movie does have that dark texture that I absolutely enjoy. So as far as cinematography goes, this film ticks the box. One rather surprising aspect of the film has been its music. I heard all of the songs for the first time while watching the film and I was mighty impressed with at least a couple of songs- ‘Tere Bin’ and ‘Tu Mere Pass’. The former especially was beautifully shot.

The analogy of chess moves to the unraveling of the story is rather intriguing. The first half has the elements that make for a good movie where as the second half falls short of the billing but on the whole the movie makes up for a good one time watch! If you were keen on catching the film, then do, you wouldn’t be too disappointed.

On the whole, Wazir makes for a decent revenge drama if not an engaging thriller.